Western music only has a relatively few progressions that sound 'good' because what sounds 'good' is cultural and ultimately subjective. That's why 'world music' or 'non-western' music, which is what it really is, sounds so 'worldly.' Because it doesn't conform to the conventions of what western music is because it evolved separately. In fact, many styles of music do not have tonality, instead focusing solely on rhythm or timbre, both, neither, or other qualities.

Music changes very little from year to year. It's easy to look at 2017 and say that music is so much more complex now than it was 100 years ago, and that's actually pretty untrue. You have to go back to the middle ages to find western popular music that really sounds unrecognizable as western music.

Nothing in music is ever really 'new', so to speak. Here's some examples of music that presaged later trends:

Ionisation (1929-1931), by Edgard Varese, would be considered wildly experimental if it came out in 2030. (Really anything by him, this is one of his more accessible pieces). Absurdism and Dada were popular at the time, and it was evident in the music.

Jivin' Man Blues (1929) by Tampa Red is a good example of the meter and rhythm that was known as boogie woogie at the time, and was considered a type of the Blues, but which is more or less the style that modern hip hop ultimately derives from, via soul and then funk, which were all an evolution of the blues. The blues has been around since 1912 so its had tons of time to morph into most of the music we still listen to.

Till the Cows Come Home (c. 1935) by Lucille Bogan. Explicit records were actually pretty common starting in the 20s. There are tons of examples of music that is considered extremely inappropriate even by 2017 standards. This one is a good example but there are hundreds of records just like this one and they aren't hard to find.

Soothing Sounds for Baby (1962) One of, if not the first, music album composed and performed on entirely electronic keyboards, and if I'm not mistaken, Scott constructed many of them himself. You may know Raymond Scott as the composer of Powerhouse

Third Reich and Roll (1976) - by The Residents is the first ever mash up album (remember mash ups?). The 'mashing' was done by cutting tape, as digital recording techniques were still a few years away. The residents are also interesting as their identities are officially a secret. Many would consider Daft Punk as innovators in this respect, however the residents, unlike Daft Punk, have never officially admitted their real identities. The band has consistently maintained, for over 40 years, that their spokesman and the person most likely responsible for their music, is actually their manager. It is also unclear if they were ever really a band in the traditional sense or if it's always been a one man show. They still give live performances to this day, whoever they are. 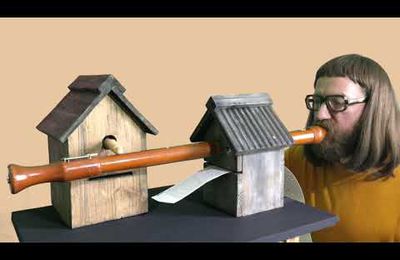